Home Shop Subscribe Advertise Articles Directories Classifieds Calendar FAQs Contact Us Login
News Home Studio Voice Acting Business Resources For Newcomers About VoiceOverXtra About Us
Tell Us What YOU Think!
Please Note: Since we check for spam, there will be a slight delay in the actual posting of your comment.
Comments (10)
Matt Morea
5/19/2013 at 9:31 PM
Great article! I completely agree with your stance. Some clients just aren't worth it.
IAN WRIGHT
5/14/2013 at 9:53 AM
Excellent article, Paul.

M Lewis Sauerwein
5/14/2013 at 2:53 AM
Wow, has this ever hit home! I have sailed in this boat far too many times. I too have developed very similar business practices. Yes, I have seen a steady decline with regard to type A clients as a result of how I generally operate.

As an American English native speaker, I especially LOVE (sarcasm intended) it when a non-English native speaker proceeds to tell me how a word (normal English word, not names, etc.) should be pronounced. I fear we will see more and more of these types of clients as the water continues to be muddied with all the newcomers.

The quality of the freelance client base as well as those who provide a service like ours is slowly becoming inundated with wanna-be's, used to-be's, and never-be's - and we have to learn how to deal with them all in a professional manner.

As always Paul, you are a light in our world of VO. Rock on-

Uncle Roy
5/13/2013 at 1:36 PM
Another great blog, Paul. Been there many times - too many of those clients. I explain that no matter who their audience may be, their English translation is not professionally done. I told one client that it didn't sound like English was their translator's first language. Their reply: he is English - ummm, if so maybe finishing high school would have been a good option when he was of that age. I don't want to insult my client, but I don't like it when they insult me, either. We've been in this business professionally for a long time - we know what we're talking about. Thanks again, Paul - carry on...
Jane Ingalls
5/13/2013 at 11:09 AM
This exact scenario was discussed at FaffCamp last week. Thank you for adding more backbone to this issue. Very few of us are equipped to voice and translate at a high professional level. Translators have my depest respect, and I'd be playing with linguisitic fire to take on difficult translations, especially with regional dialects and formality issues! In most cases, I'd rather be narrating.
Johnny George
5/13/2013 at 11:08 AM
You are so on-target, Paul. And almost all of us have learned that lesson the hard way. But that's what we call "experience." I have fallen for the "more work up ahead if you bend now" promise too many times and I just don't go there anymore. It all will work out in the long run. When you don't compromise, you free up that potential wasted time to work on "real" projects that value YOU.

And what comes around, goes around. Those Type A's will fall into the background with cheap representational work. Only trouble is, they're then replaced with new Type A's. We gotta learn from these mistakes and follow Paul's advice and see them coming and avoid that fork in the road.

Thanks, Paul, for putting into words what so many of us were thinking.


Amy Weis
5/13/2013 at 8:56 AM
Spot on, Paul! I always appreciate your insight. I think many times we're afraid that if we say ,"no," we're closing the door to an opportunity; but more often than not, having the courage to walk away will usually lead to something better. Thanks for the affirmation!
Ed Helvey
5/13/2013 at 8:19 AM
Oh, so true, Paul. And that applies to all kinds of businesses, not just voice-over and translating. When I was publishing custom edition books we got to being able to spot a type A author. We would add a hefty P.I.A. factor into our estimate. Sometimes that would price us out of the author's consideration and they would go make someone else's life miserable. Or we'd get paid what we deserved for putting up with the turkey. If it turned out the client was actually a type B in disguise and we had a great experience working together, we'd tell the client we came in under budget and discount the P.I.A. factor off the final invoice. Unfortunately, our original assessments were usually on target and we seldom issued a P.I.A. discount.
Marie Kopan
5/13/2013 at 5:22 AM
Excellent Paul, the Voiceover Serenity Prayer! I have had a few clients like that, but I didn't realize that publishing rates would push them away, as you said, it saves time so you can be more productive that way! Thanks for that observation from your experience!
BP Smyth
5/13/2013 at 2:05 AM
Excellent Paul. Thank you again for sharing your vast knowlege of the voice-over business with us. It is my hope that everyone in this business reads this article and takes heed. However, I am always reminded of the saying..."You can lead a Horse to water but you can't make it drink." And, what I have seen on the VO blogs as of late, there must be a lot of thirsty Horse's out there.

All the best,
BP Smyth 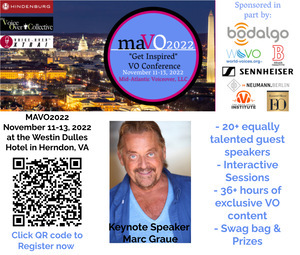