Home Shop Subscribe Advertise Articles Directories Classifieds Calendar FAQs Contact Us Login
News Home Studio Voice Acting Business Resources For Newcomers About VoiceOverXtra About Us
Tell Us What YOU Think!
Please Note: Since we check for spam, there will be a slight delay in the actual posting of your comment.
Comments (14)
Rob Reed
7/8/2020 at 7:15 AM
Terrific and timely advice. Not sure that enough people follow this advice. But, I believe this with all my heart, too. When you stop 'chasing' the wrong auditions, just because you were invited... you'll find that the RIGHT auditions find you, and chase you. Thanks for the great insight, Bob.
Carolyn Rubin
2/7/2020 at 9:42 AM
Bob is truly a consummate professional and genuinely nice guy! Grateful to have made a connection with him and find great value in his advice and years of experience. Thank you for this great article Bob and John🙏🏻
John Florian
8/20/2019 at 11:05 PM
Hi Frank,
The best way to market your voice-over talents and services is to not put all your eggs in one basket. For instance, finding jobs and clients online is done through belonging to online casting services, and also through web searches for potential clients who need your services. (Like, Google for local production studios, and call to see what they need). In time, you'll also acquire agents and perhaps join the union. It's a combination of all. For now, at www.VoiceOverXtra.com, write "marketing" in the SEARCH box at the top of the page - and get to work!
Frank Guglielmelli
8/20/2019 at 10:52 AM
What are the best places to find voice over jobs on line or best way to market myself
Thanks

Frank
Kerin McCurdy
2/27/2019 at 7:33 AM
I love reading all of these helpful tips from the experts who have been in the business for a while because I always learn so much from all of them! 😁
Michael McGinnis
5/16/2018 at 6:39 AM
I am new to the business. I retired in 2014 after a 42 year career in the insurance industry. I have no expectations at this time other than learning. Would you take time to share how you break down a script before reading it for the first time?

Thank you
Mary Ann Keiser
3/16/2017 at 7:01 PM
This is great advice. Thank you for helping me sort out audition notices. Your information is invaluable to me as a beginner in the field. Thank you.

Hugh
3/1/2016 at 8:22 AM
Sage advice from years of experience. Thanks, Bob!
Kay Shelton
11/18/2014 at 10:07 PM
I am somewhat new to voiceover. I have researched it, read LOTS of books about it, am being coached currently by a VO person from Minneapolis. I so look forward to these articles from VoiceOverXtra. I want to soak up everything I can about the business. I'm getting close to making my demo (in Charlotte at a yet-to-be-named studio), and then getting a website so I can start marketing! Thanks for providing these very informative articles by people like John Florian and Bob Souer!
David Lecinski
6/10/2011 at 3:50 PM
Excellent approach and great advice, Bob! I appreciate the well-written article and will try to approach my next few auditions this way and see what happens!
http://windycityvoice.com.
Howard Ellison
3/15/2011 at 5:45 PM
For what it's worth, I do jump to the mike ... for a take that's raw, no planning, so I can capture that feeling of discovery. Then I pause to prep for a second take, find emphasis points, visualise the listener, etc. With luck, I can paste a few elements of the first to boost the energy of the second. If not quite there, it will serve as a guide for a killer third! It all works fine when the topic resonates. If not, well I do go on labouring at it - I'm relatively new - and have won unlikely jobs as a result. Some turned out to be amazing fun, leading to more.
Angie Farruggia
3/8/2011 at 9:56 AM
Thank you for the advice . I am very new to all of this ,and at the moment am auditioning for almost any thing coming my way . It is hard not to, as I have no experience as yet and need to build up some kind of resume. It is very easy to get sucked into jumping on the slightest comment that is made about you!! I have only been a member for one month and have yet to land a job, but I am not feeling bad , these are early days I believe and I treat every audition as a 'professional practice.'
Amy Snively
6/29/2010 at 11:06 AM
Excellent advice!
Robin Rowan
5/17/2010 at 5:18 PM
Hey, Bob, this is great information. I'm happy to have an Inbox filled with potential jobs every day! But you are so right, you have to qualify those jobs. I just skipped over 2 jobs that I thought I'd be good for since more than 80 people had already applied. I think I'll pull them out of the circular file and go for it!
Back to Articles 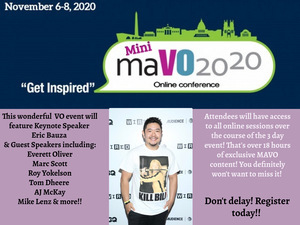